Networked thought and other features

First, I would like a Roam- like networking to be implemented. Personally, I would like to see a Mind map format, that can be toggled with the SIdebar. One can see braches of Parent cards and any non-attached cards. In addition, One can link cards or have two parent cards, this will then connect them through lines and slowly, become somewhat like Roam.
Secondly, a feature definitely lacking is multi-select. This can help with organisation like addressing different cards through tags or parents
Thirdly, I would like to see more than just cards that contain text. I would like to see cards that can contain tables, graphs, web inserts, pdfs and docx, making supernotes more versatile and can act like a storage cabinet for projects.
Finally, some simple features I would like to see. I would like to see instant recognition and headers when typing. For example, when “-” is used, I want a bullet to immediately appear, instead of having to press ctrl + enter. Also, one can use some keyboard shortcuts to have headers to make classifying topics in a single card easier. If numbered list could be added, that would be great too!

Hi @Gulpin, thanks for writing down your thoughts!

Just thought of some other feature, Flash cards, It would be good to hide some infomation and when clicked on then appear, I know that there is already the spoiler function but that disappears when my cursor hovers over it

Hi @Gulpin, great idea! Flashcards are another “Card Type” that we plan to add in the future. I have added a +1 to this feature in our internal roadmap.

Yep. That’s what I want too…

I want a bunch of searchable, tag-able cards that I can easily create, to store all kinds of information, and content in a rich format. 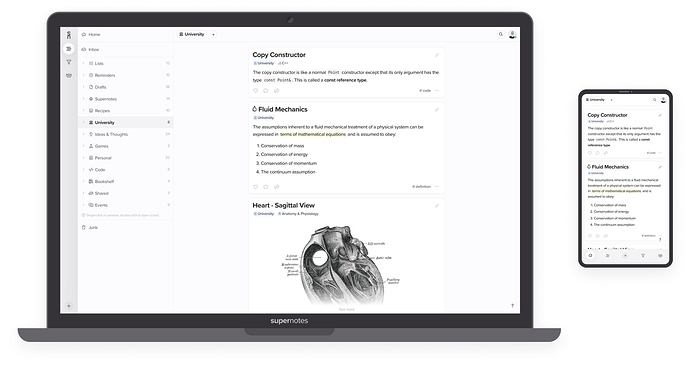 When I saw that image, that’s what I thought! A bunch of cards I can put anything in! Holy canoli

Incidentally, one thing I’d think about with that wysiwyg editor, is having some sort of custom-html/custom source code option.

That would satisfy 100 potential feature requests—both current requests and future—with one single feature (Okay okay. It would also give me exactly what I want :-).

a. I’d buy a like 5 monthly subscriptions for a whole year and;
b. I’d tell lots of people about it, because… it would be incredibly useful, because… no one else would have an app like it, because… every other app force-mandates the user to stare at markdown syntax, while they edit text! Yargh! (I do absolutely love the concept of your app. Don’t forget that!)

Custom cards (with an editable source code) is something that we have discussed internally in the past, and is indeed something we are interested in supporting in the future. Giving users the possibility to add and create cards with any type of web-enabled content. However as you can imagine it’s quite complicated when it comes to performance, security etc. so we are focusing on WYSIWYG for now. Looking forward to sharing that update with you!