No way to remove a member from a card?

I was trying hard, but was still not able to find a way to remove a member from a card. 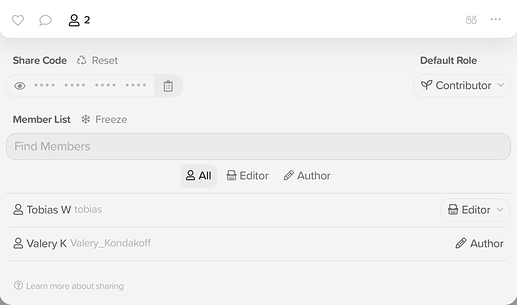 You can reset code or freeze, so no new members can join, but looks like there is no way to edit the list of existing members. Bug? Unfinished feature?

Neither actually, haha. This is (was) the intended behavior. While we were building Supernotes, one thing that we wanted to make sure of was that, if you were using other people’s cards to build up a personal knowledge base for yourself, we generally didn’t want those cards to ever “disappear” from your library.

The solution we implemented was to just not allow removal of people from cards once added. In this way, we saw it like email, where once you “sent” an email you can’t take it back – the other person has the content.

However, as we’ve seen people use the platform (and have used it more ourselves), we have realized that probably there is still a need for being able to remove people entirely from cards.

We are still figuring out the best way to do this so that it both empowers the author and gives those the card has been shared with some level of safety in knowing that they can build up a collection of other peoples cards and won’t be arbitrarily removed from them. At some level we think this might just needed to be handled with trust between users, but we have some other ideas we are playing around with.

We will definitely keep you updated.

Thanks for explanation!
When saying ‘remove member’ I was not talking about immediate removing all the shared info from his storage, just stopping him from following the updates.
As Supernotes cards are highly changeable (compared to the sent email which will stay ‘as is’ forever), their content might change in a way, which is inappropriate to the specific member. This is why a feature to remove a member (and a feature to stop following specific shared cards) are important.