I’d like to have lists like this (with support for automatically changing the indices as I indent or outdent):

I don’t know if there is a well-defined convention for what comes after the lowercase roman numerals if you have a fourth level or greater. Some apps just keep doing lowercase roman numerals all the way down at that point. Personally, I’d probably switch to bullet points if I ever got there, but I think unordered lists within ordered list items are already supported.

Indented numbered lists are already supported, just use four spaces, like so:

Once they are rendered in display mode, the ordered list type automatically changes depending on the indentation, so it will look like the following: 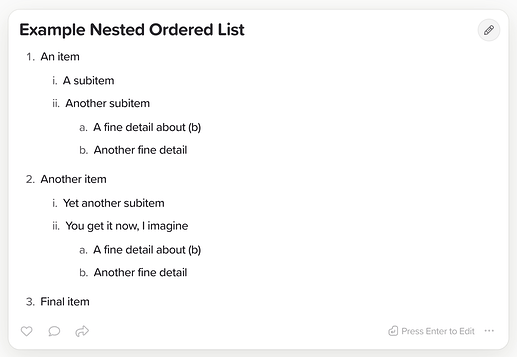 We definitely can try to improve the edit mode experience though, to automatically replace the numbers with letters depending on the level of indentation and will have a look at improving this in a future update!

Ah, I see! I didn’t realize to what degree it was already supported because: