I like the embed feature in SuperNotes for YouTube videos. I created a shortcut that grabs the url and the title of a YouTube video and uses that information to make a new card with the video embedded. 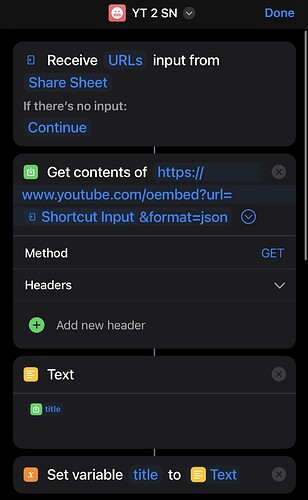 Essentially I use the Get url shortcut method to grab the title for the video I’m sharing from YouTube and save it a variable named “title”. 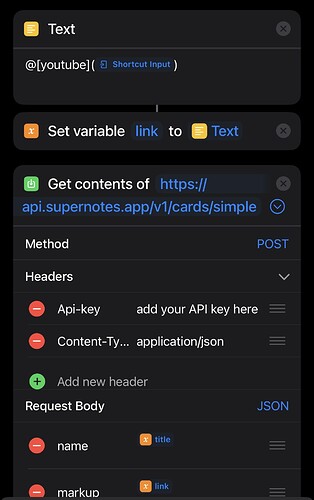 I then get the url from the same method and stick that in a text method to creat the markdown necessary for embedding a YouTube video in a card.
@[youtube](link to video)
This markdown text is saved in a variable named “link”.

Then using the link https://api.supernotes.app/v1/cards/simple in a new get url method set to post along with my API key in the header and my variables in the body along with some tags I use, the necessay info is sent to my account and creates a new card that is titled after the YouTube video with the video embedded in the card.

I then use the open app method to open SuperNotes and my card should be the newest created. 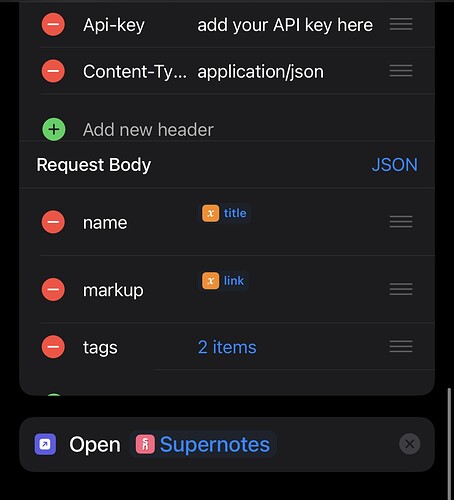 I used the information from the thread below to translate all the JSON info into iOS shortcuts:

Separate paste across both card title and content Feature Requests

Hi @clef_shanty, Since you’re already using an iOS Shortcuts, you can create a shortcut to send this information to the Supernotes API to create a card directly – with the Youtube title as the card tile and the link as the card content – you won’t even need to open the Supernotes iOS app. Using a Text Action to configure the data in a JSON format, and then use a "Get Contents of URL’ to send that to the Supernotes API. You will need also need to create an API key for authentication, here’s how…

This is great @clef_shanty, glad you were able to get this working!

Worth noting that we are actively working on improving our developer docs / integrations so that it should be much easier / clearer how to do things like this in the future.