Supernotes 1.8.0 has just been released. We are very excited to be introducing our desktop apps along with some great new features. Here’s everything that’s new:

You can now download Supernotes for Desktop on your Mac, Windows or Linux. We also have support for ARM architectures, including shiny Apple Silicon. These desktop apps are currently in early access, so if you have any feedback or suggestions please let us know here on the Community.

Up to 5x Faster for large libraries

Speed is important, and even though Supernotes has never been considered slow, performance is our top priority. We have done some major reworks under the hood, so everything will load even faster – blink and you will miss it! For users with especially large card libraries, you should see the most improvement.

Every Noteboard now has a cover at the top, which quickly shows the information about where you are. Don’t like the new covers? You can hide them with one click using the up arrow in the bottom right of each cover.

Many of you already have 1000s of cards on Supernotes, and sometimes it can be hard to surface cards that you haven’t looked at in a while. In an attempt to make it easier to find those cards, we’ve added a new collection called ‘Thoughts’ – these are “lonely” cards that either don’t have a name/content or don’t have any parent/child cards. With the Thoughts section, you can flesh them out, junk them if they are no longer relevant, or just leave them in Thoughts to help you find them later. Let us know what you think over here on the Community and if you have suggestions for other default collections.

You can now generate API keys from within the new settings menu, paving the way for future integrations and use-cases. We’ve majorly improved the experience around logging in, so that you will need to do it much, much less frequently while still maintaining a high level of security! We have also made some major improvements to the API, which you can find here.

We’ve moved things around a bit, so now all your settings reside in the new “Settings” menu. Here you can access the new “User Preferences” screen, which allows you to customise whether your cursor spawns in the title or body of a new card, the hotkey used for opening up the card coupler, and set your themes. Speaking of themes, there are two new ones – a sepia-style theme called ‘Deuterium’ and a darker dark theme, ‘Carbon’. The process of switching between themes should now be much faster as well.

Other Bug fixes and changes

I’m super excited this release has finally arrived. For me, it feels major. It’s blazing fast for my 1000+ cardbase and the probably related fix of the command-promt-doesnt-load-all-cards-issue is huge for me. Well done!

It seems that the ominous WYSIWYG editor has been postpone for a later release. Could you give some insights into what your plans are for that? In the meantime, the editor does feel more stable for me as some issues I had with 1.7.x have been resolved. Similarly, the changes made to the outline really improve the experience.

What’s most exciting for me is the introduction of the new concepts thoughts and covers. I like the cover idea, and it is very well executed! One immediate consequence is that on mobile, adding a card now requires one click less. This actually has some significancy, as for me the app feels to be more encouraging to actually add stuff now.

Concerning thoughts, I feel like you are addressing a major subject that affects pretty much any system for information storage - maintaining consistency. While as of now I do not fully understand what the main function of this collection is and how I might make use of it (I might share my thoughts on thoughts somewhen later), it does immediately give some sense of control. I already did discover some orphans!

You guys, congrats for reaching this milestone! Judging from the time it took to deliver this release I reckon this required quite a bit of effort. Hope now you can have a day or two off.

Love, love, love. Super fast, and the tap-to-create-card is especially great on mobile. Also really like the covers. Great work Connor and Tobias!

on Thoughts: for me this section shows all cards, except those with parents. As you described it, cards with childs or title/content should be filtered out. Or am I missing something?

Cards with parents/children and name and content should not be displayed in Thoughts.

The Thoughts collection has changed a bit since this release and currently (1.8.4) shows all cards that either have no name or no content or no child/parent cards (or a combination of all those things). Essentially, Thoughts should show you cards that are currently unfinished or haven’t been solidified as being part of your hierarchy yet. I use thoughts every day for drafts, tasks and ideas that I’m currently working on.

If Thoughts aren’t displaying correctly for you, try logging out and back into the app. Hope that helps 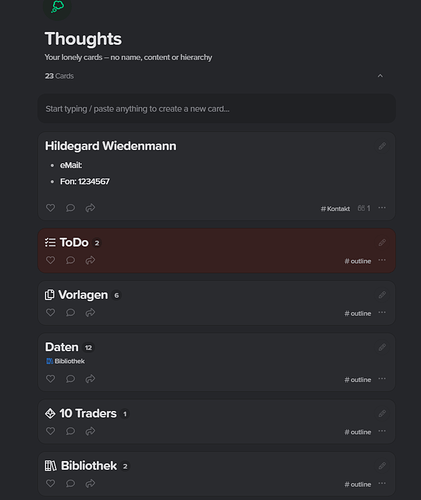 ok, sorry, but the cards with children had no other content. As soon as I filled in sth, they disappeared from Thoughts (after logging out and in). But still there are cards with title and content… 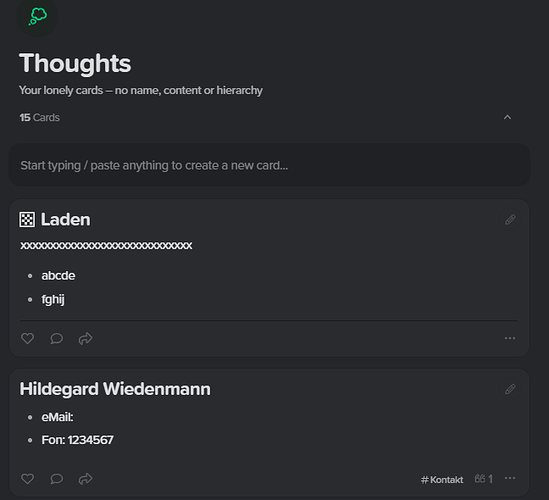 The cards in your screenshot do not have parent cards, and are not part of your hierarchy so are still classified as a ‘Thought’.

Also you don’t have to log in and out to see the updates to Thoughts cards. We deliberately don’t move cards out of Thoughts immediately since you may want to edit them further and it can be jarring having it immediately disappear. If you switch to another view such as ‘Home’ and then back to ‘Thoughts’ you will see the updated cards are no longer in ‘Thoughts’. Hope that helps

thanks, it becomes clearer now for me. But a card with a Link to another card and a tag should not be considered a Thought. Tags and backlinks are also a sort of hierarchy (in my personal workflow at least). Maybe you should give the users some options what they consider a Thought…
Thanks for your quick answers!

Hi @malte, thanks for your feedback! We are still improving ‘Thoughts’ and you’re right currently it doesn’t take into account people who might wish to use it with a flat hierarchy with tags and backlinks. I’ve made a note of this (in my ‘Thoughts’ aha) and we will review this in the next major update.